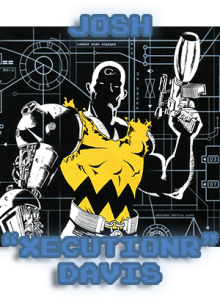 Josh “XeCuTioNR” Davis will be taking on the Old-Schooled challenge on December 29th at 6PM. Josh is one of the top players in Old-Schooled history. Josh first participated in the old-schooled tourney with the second Tournament and has the unique honor being the winner of both “Abaddon’s Challenge” tournaments, #10 and #20, both tournaments filled with the hardest challenges in Old-Schooled history which included challenges like Ninja Gaiden stage 7-1, Death Egg Zone, and Silver Surfer the Magik Realm. He’s been thwarted by Nick Skogstad in the past and will definitely be looking to prove himself in the beginner round for a shot at defeating his nemesis.

You can come see him play live at That Game Store in person or watch him on twitch.tv at Furluge’s and That Game Store’s channels! Since this is a live event and some setup time is needed the broadcast is not scheduled to start until 6:30PM.